In Japan, we invent things, such as dishes that have nothing to do with what the name entails...
one of those would be Neapolitan spaghetti.
I have been told that in Nagoya, they serve this at cafes on cast-iron pans with egg beneath the spaghetti.
http://tabelog.com/imgview/original?id=r473547453113
Apparently you eat the spaghetti with the half done egg, so I tried this at my friend's place the other day, where I learned A.it needs to be served with the egg half done, B.it doesn't need too much spaghetti, C.always test before declaring you can cook at someone's dinner party....
The result of my culinary experiment, is as below↓↓ 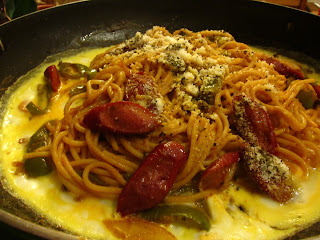 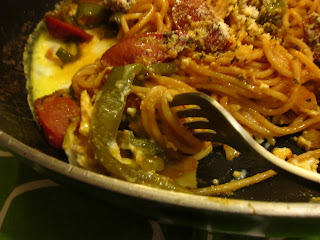 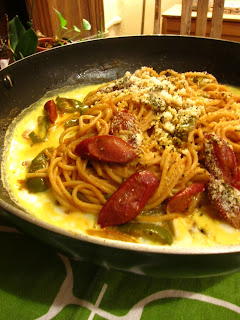 Posted by Cookpadding at 10:51 AM No comments:

I am happy to start the first post in 2013 with the most amazing dish ever; Hirame shabushabu!!!!
Our friend who is the head chef at one of the best macrobiotics restaurant in NY called Soen, is a genius!!  He ordered fish from the market days in advance, sliced the fish in sashimi (we ate it both as sashimi and shabushabu and ahhhh was it good!!) placed on konbu to add flavor.  Hirame (fluke) is usually a very plain fish, but with the care and cure that the chef put into it, its flavorful like no fish you've ever had! perfect for shabushabu by just very briefly dipping in hot water, so you can enjoy the half boiled part and the raw part, is amazing!!!  All vegetables were very well thought through and delicious in a way unexpectedly good, baby cabbages instead of hakusai cabbage, the mountain of mushrooms that would make a mushroom farm jealous!  At the end of the journey, the chef marinated the fluke with the mix I brought for my pickled eggs (soy sauce, mentsuyu, mirin) along with my other marinated celery (lemon, sesame oil, white wine vinaigrette, honey, lots of salt and pepper) and added togarashi pepper and lots of good yuzu pepper, AND MADE OCHAZUKE!!!! Oh boy was that good!!! My friend aptly puts the sum of the dinner in his email to me; if there was a restaurant that only served that - I would go once a week during winter! Plus that was probably one of the best Ochazuke I've ever had." Cannot agree more!! 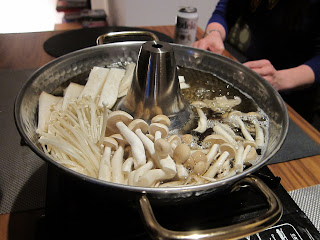 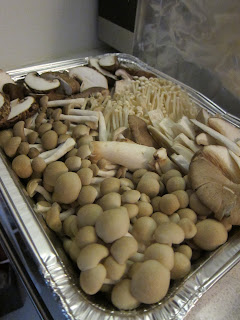 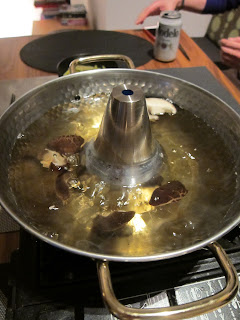 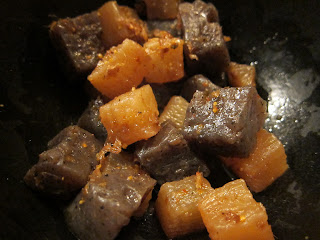 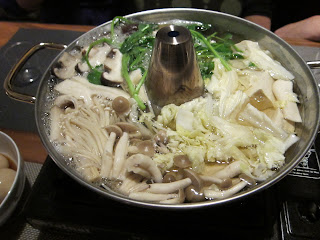 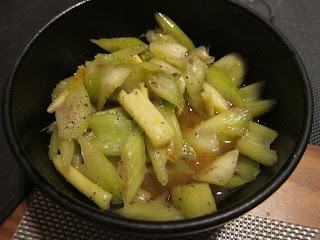 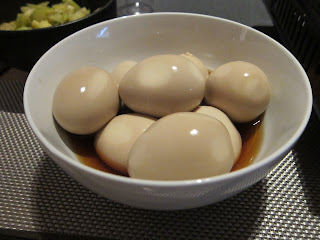 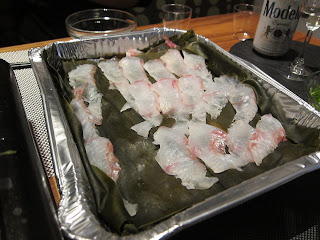 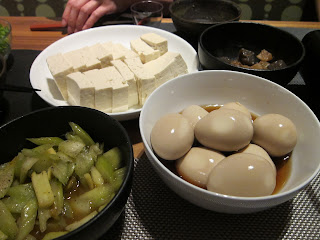 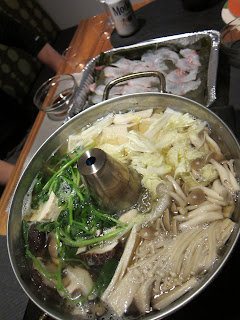 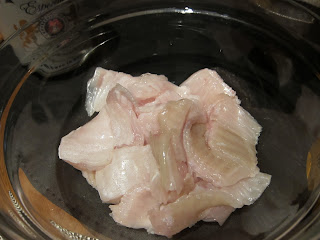 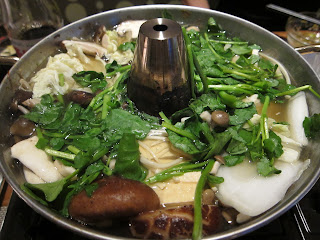 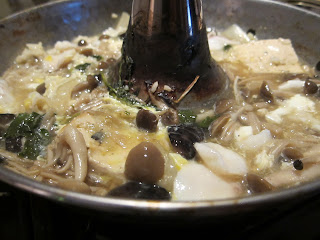 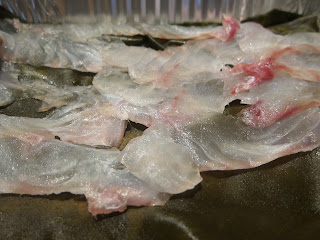 Posted by Cookpadding at 10:49 PM No comments:

so there was SANDY! phew! lost public transportation access, electricity, hot water, tireeed, BUT now all solved!! well not all but close to it, and my heart goes out to those who still dont have access to the necessary things that take you through this cold weather.
It's actually really cold! all of a sudden. must be the day light saving time change thing that happened as well, just really chilly and im not ashamed to pull out my puffy down jacket (which i initially pulled out since I was walking across brooklyn bridge...its windy up there!!).  Because of the cold, I made Tonjiru! I know im not the only one since I met a friend earlier today at a japanese super market buying the exact same ingredients to make the exact same thing (great minds think alike- or all japanese ppl think alike!). 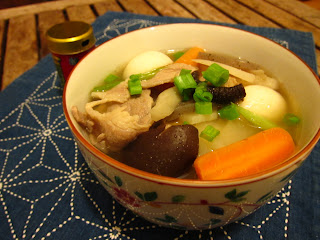 I forgot to add frozen satoimo in the beginning so by the time i added it, it was too late and made it mushy but its good. its warm. its so, much, better, than what i was eating for the past week in the dark!!

Posted by Cookpadding at 8:44 PM No comments: 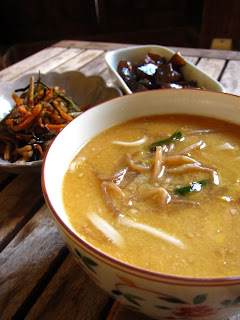 got Goto udon noodles from someone who went back to Japan, and added beansprout marinated in garlic and sesame oil &sesame with raw egg.
Thats all I did, but it was unpredictably extremely good!!!
raw egg in itself kind of becomes a sauce that enhances other flavors in a rich creamy way.
so easy, SO good!

Posted by Cookpadding at 8:24 AM No comments: 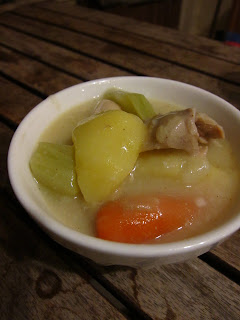 today started bright and warm, but then took a quick turn and became rather cold and chilly...
Hence! chicken cream stew!
i made a mountain of it, but noticed how my boyfriend dislikes carrots so picked out all of them and ate it myself... it's good, but not that great when you eat a bag full of baby carrots stewed at once!

Posted by Cookpadding at 8:08 PM No comments: 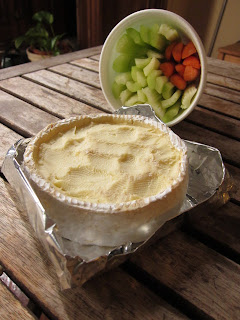 this, I think is pretty genius!!!
I'm sure i've seen it on cookpad before, but just recently was reminded of it by a very outdoorsy friend who told me how cheese fondue is best to do outdoors cus the smell wont stick to your kitchen walls.
this is extremely easy; carve off the top of brie cheese, place on aluminum foil and put it on BBQ grill till the cheese melts!! eaaasy peeesy :)

Posted by Cookpadding at 9:37 PM No comments:

cold remedy of the day; apple 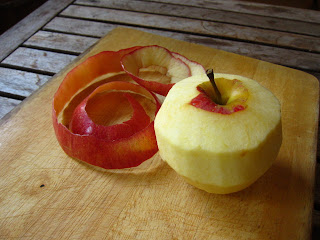 i pealed the entire apple in one go! :D

Posted by Cookpadding at 9:22 AM No comments:

Cookpadding
This is a diary of a foodie. I am an active user of this Japanese recipe site called "cookpad" with a handle name "cookpadding". http://cookpad.com/kitchen/1405978